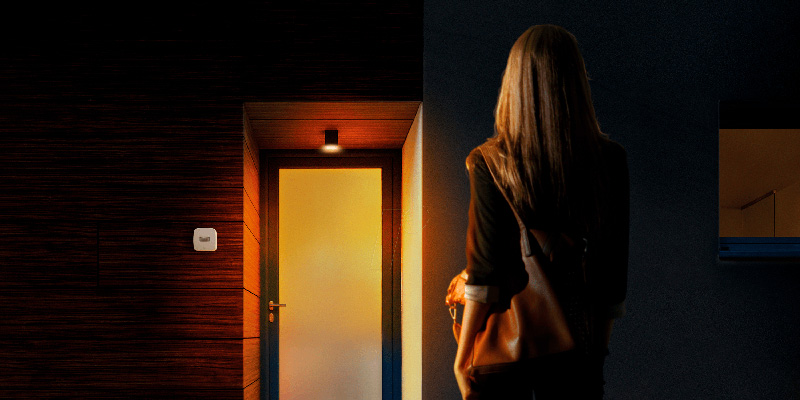 Typically, security lights are fitted near the entranceways of a building, and activated by motion sensors to turn on. They are used most effectively when they are installed at all the entrances and exits. Motion sensors carry many benefits, for private homes and businesses alike:

Arriving home to a dark house and struggling to locate keyholes in the dark is a nuisance, and can make one feel edgy and paranoid of even the smallest noise. By simple installing a motion sensor-activated light, this scenario can be avoided altogether.

Motion sensor-activated security lighting deters homes and businesses from would-be intruders. The sudden flooding of an area with sharp, bright light, will startle even the most hardened intruder.

Motion sensor-activated security lights are an added measure that insurance companies endorse, because they lower the risk of both burglary and accidents. This could not only reduce your insurance premiums, but also cuts down on the amount of electricity that is wasted when lights that aren’t motion sensor-activated are left on unnecessarily. 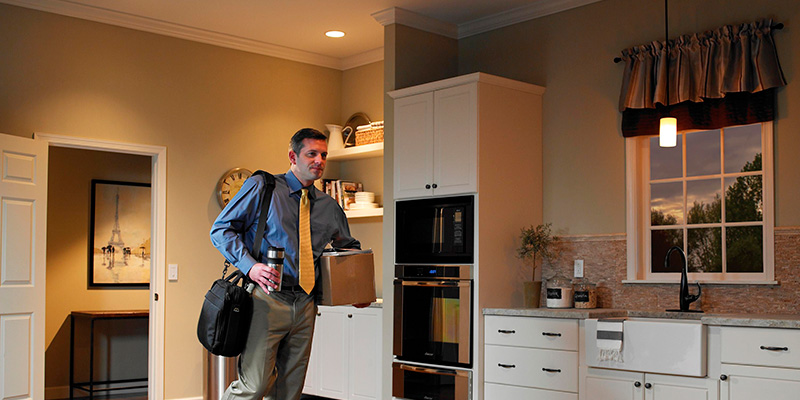 Occupancy sensors are mounted like light switches; on ceilings or walls inside your home. They work by detecting movement and switching on in response, such as when a person enters a room. Then, after a set period of inactivity (i.e. when no movement is detected), they switch the lights off again automatically. Some sensors adjust light based on time of day, while others are made specifically for use in bathrooms and stairways.

Occupancy sensors offer a number of benefits, including:

Occupancy sensors have shown to cut down electricity consumption by up to 90%, depending on the type of light used and the amount of foot traffic there is in that space. Occupancy sensors are fantastic for use in spaces that are intermittently or sporadically occupied, such as bathrooms and corridors. As a general rule of thumb, occupancy sensors work best in rooms that are usually empty for periods of time lasting 4 hours or more, and not in areas that are used often, such as kitchens.

Motion sensor-activated lights make fumbling in the darkness or struggling with lights because your hands are full, a thing of the past.

By providing adequate lighting when it’s needed most, occupancy sensors enhance security and prevent accidents in spaces like stairwells and corridors.

They make life that much easier

We all know one; that person who never remembers to switch off the lights when they’ve finished using a room. Perhaps you are that person, and try as you might – you just can’t turn it into a habit. Occupancy sensor-activated lights will take care of the lights, so you don’t have to.

Contact Sunburst Electric for professional assistance with installing motion sensors in your home or at your business.

send whatsapp
Chat To Us
Send via WhatsApp

Refer A Friend And Earn
Up To R500

Sign Up To Be Part Of Our Refer-A-Friend Program

What Our Clients
Have To Say

Morning absolutely amazing! Definitely a company that we will use again. Professional, helpful and friendly service. Great job thank you so much.

Thank you for the incredible service from Mashaka!! He was amazing!

Thank you for the friendly and professional service. Will definitely use Sunburst again.

10, Thanks for the great service

Pleasure , you guys were awesome. Will definitely recommend you!

Thank you guys for the amazing service!

Polite, professional and knows what he is doing. An absolute pleasure to deal with a company that has high service level standards.

Great guy, great service. He found some faults and I will definitely be needing your service in the next couple day, speak soon.

An absolute 10 rating from me for the amazing service from Rudean, Nicolette and a very professional Itani. What a pleasure dealing with him. Thank you so much! Pam

10, I would absolutely recommend Sunburst Electric to family and friends. Your professional approach is very refreshing in an industry where so many others cant even get the basics right,… Read more “Cheryl Tew”

As a tenant, 10/10. Really appreciated the efficiency, communication and punctuality

Hi, I would gladly give a 10 for the service and professionalism.I want to commend both Itani and Moses for their professionalism and the sheer determination not to leave until… Read more “Suren Reddy”

I would absolutely recommend Sunburst Electric to family and friends. Their professional approach is very refreshing in an industry where so many others can’t even get the basics right, like… Read more “Cheryl Tew”

I have been pleasantly surprised by the service levels received from Sunburst Electric. The appointments are always on time and quotes are received shortly after the initial appointments. Assistance is… Read more “Shari – Homes by Shari”

I would highly recommend Sunburst Electrical to anyone who is looking for an exceptional electrician. The service experienced from the team was superb and I was greatly impressed by their… Read more “Kelly Odendaal”

I can’t remember the gentleman’s name, but I would first want to complement his services. He was professional and well organized, there wasn’t one moment I doubted his abilities. He… Read more “RJ Liebenberg”

Your service was excellent, Thank you

Definitely a 10 rating and will use you guys again. Tebogo was brilliant came before expected time, professional and friendly and knew exactly what needed to be done and how… Read more “Clint Rangiah”

Finally I have got the most efficient, professional and friendly service from an Electrician who went beyond the job at hand and helped me save energy with his clever ideas… Read more “Thabo Kgowana”

Always on time, work was professional. Open and honest about pricing.

Communication was very good and was very impressed.

Definitely a 10! Excellent service and Thank you

Very Professional.  Prefer using Sunburst Electric due to the payment option given.

I can recommend Sunburst Electric without hesitation. The work was carried out professionally and efficiently and you were informed of their arrival in advance and who would be coming to… Read more “Flo G”

I would like to say that Cliff Kilian is excellent both with his work and his customer service.I like him because he always says, “If you have any problem, please… Read more “Carol Sabath”

I had no problem at all with the booking to the point of finishing!  Bekya, of course, was a pleasure to be with, Michelle and Nicolette were super-sweet and super-efficient.

I had very good service and the guys put in a lot of hours to re-wire and try and resolve my electrical problems – which I really appreciate.

I am delighted to share that my experience with Sunburst Electrical has been a positive one.  Nicky was amazing, they came out and evaluated what work needed to be done,… Read more “Melanie S”

Sunburst Electric has restored my faith that indeed efficiency exists. The professionalism and enthusiasm of your staff must be commended.

I have been extremely impressed with Sunburst Electric from my first request for assistance. They remain in constant contact with you, letting you know when the technician will call to… Read more “Mick John”

I have been so impressed with Sunburst Electric. From my first request to assist with some serious electrical issues they have been professional, honest and have made me feel like… Read more “Henré Prinsloo”

Sunburst Electric comes highly recommended from me. It’s the little things you guys do. The mat to dust your feet, boot covers, email in the morning to advise me who… Read more “Lloyd De Bruin”