Not All Generators Are Created Equal 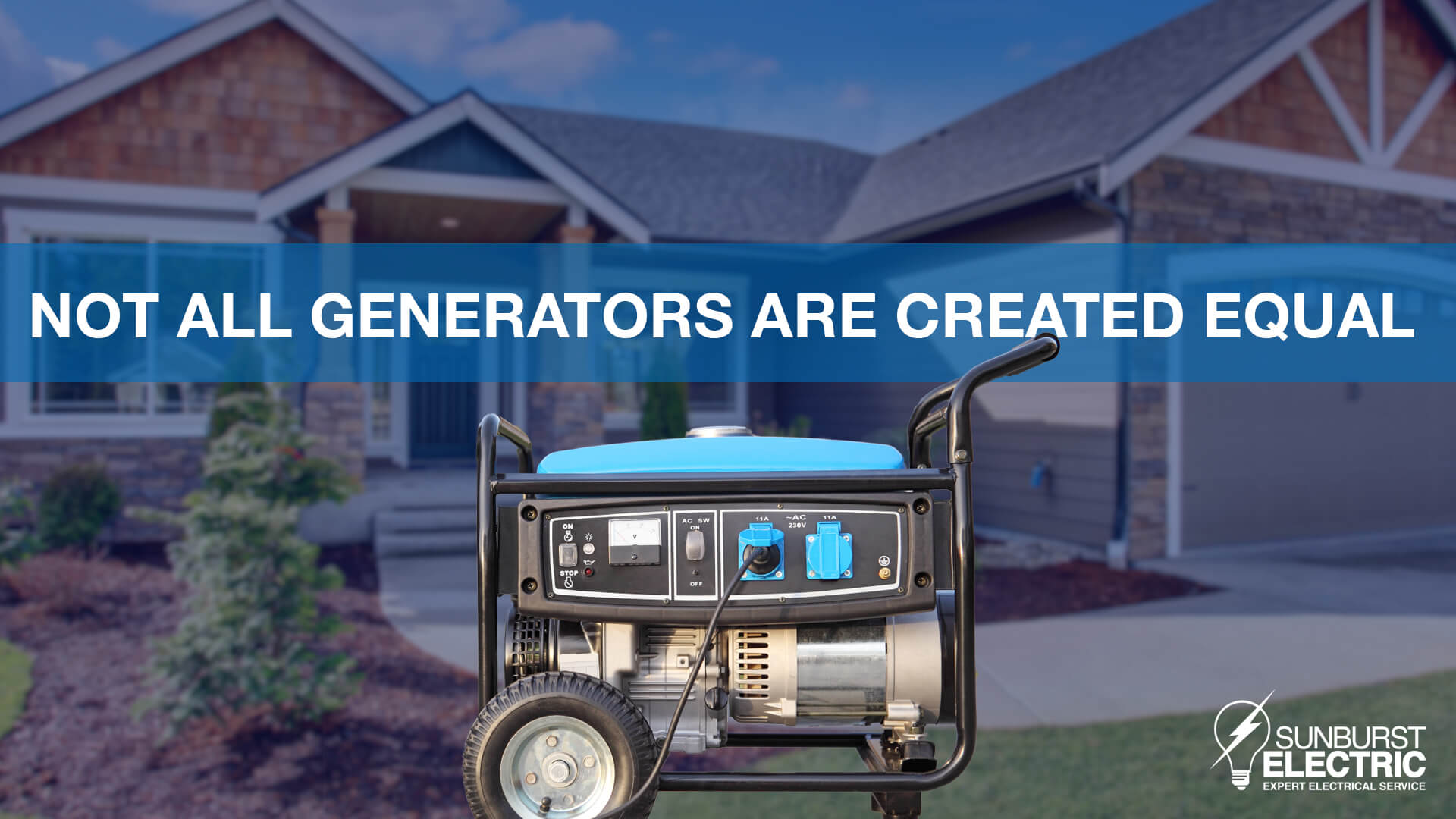 It’s become the norm for South Africans to experience loadshedding at least a few times a year. We all know the tedium of long hours spent missing out on favourite TV shows, or wasted gaming opportunities. If you have not yet invested in a generator to ease your blackout woes, or are looking to upgrade your existing generator, Sunburst Electric is here to give you a few handy tips for picking out the best one to suit your needs.

Firstly, not all generators are created equal. And while that relatively inexpensive one may seem the better budget option, in the long run it’s more than likely going to result in the replacement of a whole host of expensive electronics due to unexpected power surges.

The second thing to keep in mind is that generators come in two distinct types, and each of the two has very particular uses. Standby generators are meant to serve as complete system backup when the power goes out. They are generally fairly large, and aren’t movable at all. While they may be expensive compared to portable generators, they would ensure that you can binge watch the latest conspiracy theory on YouTube, or the newest Netflix addition to the Tiger King saga.

Most people, however, prefer portable generators which range in pricing from bargain bin to high-tech hipster. The latter variety can even be digitally controlled (the generator, that is, not the high-tech hipster – although there may be an app for that in the works). All of these options, though, are essentially glorified petrol or diesel guzzlers, with a solitary plug socket on the front. This, of course, means you can only power one multiplug from the potentially noisy contraption. Moreover, portable generators aren’t always waterproof and the option of running one indoors is nullified by the high risk of death by asphyxiation due to carbon monoxide poisoning.

That being said, the standby generators have the potential to irk some neighbours of the ‘get off my lawn’ variety. Thus, both come with their pros and cons, and really it’s up to each individual to ascertain which best suits his/her/their circumstances.

Much Ado About Inverters

Inverter generators seem to be the safest bet. Hypertext explains that “[m]ost household appliances require an alternating current (AC) power supply, which is what the spinning motor in an electric generator creates. But if you plug, say, a TV directly into a petrol generator the fluctuation in the supply produced by the generator is likely to fry it.

In an inverter generator, the AC power produced by the engine – which is likely to fluctuate in output dramatically and damage sensitive electronics – is pushed through a rectifier and turned into DC energy. This is then passed through a second circuit which flattens out the load and turns it into a nice steady stream of power. It’s then passed through an inverter which turns it back into AC electricity suitable for the home.”

Basically, what this means is: without an inverter to mediate between the device and the power supply, damages are likely to be incurred and that brand new and shiny 65” flat-screen TV would no longer be as appealing. Inverter generators are also less likely to rouse the ire of that bothersome neighbour – with one caveat: they are not as powerful as their diesel/petrol run brethren. They do, however, come in variations ranging from about 1 000 to 4 000 Watts.

So What Can I Power With A Generator?

In real terms, should you choose a generator in the 1 000 to 4 000 Watt range, it means that you could run your desktop PC with relative ease and still have Watts to spare (unless you’re running a gaming rig, that is) since it only uses 100 W of electricity. Your Xbox One only draws 72 W (PS4 draws 88 W – guess that settles that old debate, huh?). A 40” Samsung LED TV requires 70 W so you could easily watch your favourite show with a generator running. If you’re wanting some popcorn with the newest Star Wars movie, though, keep in mind that a microwave can drain well over 1 000 W of your precious (and limited) electricity. The labels at the back of your appliances will generally indicate maximum electricity drain. Tally that count to get an indication of what you would need from your generator during load-shedding.

Remember as well that it’s generally recommended that you resist your DIY impulses and have your generator installed (and checked) by a professional. Fortunately, Sunburst Electric is standing by to assist in that regard! Call us on 087 551 1000, send a WhatsApp to 064 575 5271, or book online!